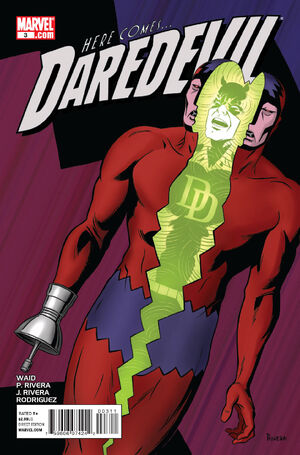 Appearing in "Sound and Fury"Edit

Synopsis for "Sound and Fury"Edit

Daredevil is strapped up to some sort of machine with wires feeding into his nose and mouth. He senses that he isn't the only human in the room, that there is someone else with him. The man tells him that he is Klaw, the superhuman known as Klaw.

Meanwhile, Foggy Nelson tells Matt's client, Ahmed Jobrani, that because of rumours that he is hearing voices, he is unable to represent himself in court, nor can he refer him to another lawyer. Klaw explains that he was one of Klaw's soundshadows and was building an antenna that would locate and bring back the real Klaw. The other soundshadows work under his direction. Klaw's clone explains that his men hurt Jobrani to continue work under his store.

Daredevil then tries to escape, but the sound when he breaks free is picked up by the soundshadows and he is hooked back up to the machine. Daredevil then dislocates his left thumb, slips his hand out of the shackles, and retrieves his club. He then screams loudly. The soundshadows copy the scream, and in the confusion, Daredevil escapes. He grabs the helmet they put on him and makes it to the street.

Klaw's clone then pursues him through the street, and Daredevil's senses had been weakened by the scream. This gives him a great disadvantage, and he is hit by a passing truck. He is thrown onto the road, where cars threaten him. Klaw comes up behind him and grabs for the helmet but Daredevil destroys his suit. Daredevil demands to know who was working with them, but cannot hear the name due to his ear damage.

Later, Matt is angry that everyone knows Jobrani is hearing voices. After working with Jobrani in learning how he could represent himself in court since he has nothing left to lose, Jobrani's case is won. While celebrating at a bar, Matt tells people that his law firm is now a consultant firm which specializes in people who need expert help in representing themselves in court. Foggy responds badly to this...

Retrieved from "https://heykidscomics.fandom.com/wiki/Daredevil_Vol_3_3?oldid=1420893"
Community content is available under CC-BY-SA unless otherwise noted.