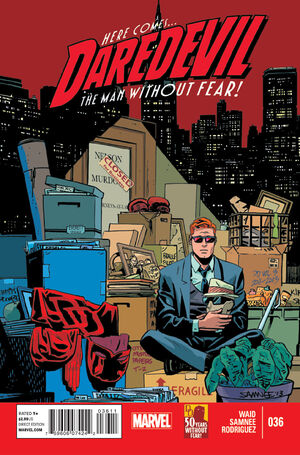 Under oath and with God as my Witness, I'm telling you that I am Daredevil. Always have been, always will be.

Appearing in "I Am Daredevil"Edit

Synopsis for "I Am Daredevil"Edit

After talking it out with Foggy in the hospital earlier about the ramifications of what Matt's crazy plan will do to them, Matt Murdock under oath with Kirsten as his attorney confesses in court that he is Daredevil and gives a description of his accident that gave him his powers and purposely discredits himself over the lawsuit he previously made against the Daily Globe when his secret identity was first leaked. This causes Mr. Ogilvy to send in a Sons of Serpent hit squad. During the confession, Matt discovers the trial's judge, Judge Pierce was responsible for the hit squad that attacked him last night and realizes both he and Mr. Ogilvy were trying to work together to take control of the group. Matt sensing the hit squad coming in publicly unveils his Daredevil costume and defeats the hit squad.

Later with the Sons of Serpent members smoked out from within the NY justice system Matt appears before the New York Supreme Court in regard for his actions. Though the people presiding over his case are thankful for smoking out Mr. Ogilvy's actions and acknowledge the fact that the city has benefited over Daredevil's past actions, however they cannot afford to ignore the code violations that the law firm Nelson & Murdock had committed over the years. As a result both Matt and Foggy are disbarred and no longer allowed to practice law in the State of New York again.

Later, talking it out with Kirsten at his now-closed law firm, though apologizing to her for getting her fired as well, Kirsten suggests that although it is difficult for him as a disbarred attorney to be admitted to another State Bar, it is not the same in a State where Matt had previously practiced. Aware that Kirsten knows that he once served as a lawyer in San Francisco, once she points out they have great doctors there for Foggy, he realizes that she wants him to leave his life in New York behind and move back to California. When Kirsten implies that he is too chicken to do that, Matt responds by kissing her.

Retrieved from "https://heykidscomics.fandom.com/wiki/Daredevil_Vol_3_36?oldid=1420926"
Community content is available under CC-BY-SA unless otherwise noted.