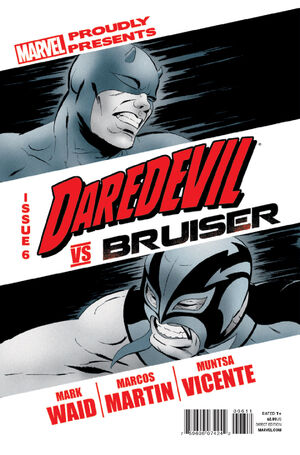 THE MOST CRITICALLY ACCLAIMED NEW SERIES OF THE YEAR CONTINUES ! Matt Murdock relives some of his late father's worst nightmares as Daredevil meets Bruiser, a fighter who can't be put down and won't fall! How will Matt survive--and how will doing so make him the most dangerous man in the Marvel Universe?

Retrieved from "https://heykidscomics.fandom.com/wiki/Daredevil_Vol_3_6?oldid=1420896"
Community content is available under CC-BY-SA unless otherwise noted.