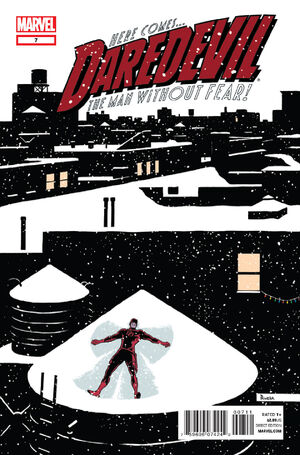 The best is how proud I am of these miracle kids. For right now, all I want to do is get them back where they belong at Christmas. Home. To be with their parents.

Matt Murdock volunteers to take a group of blind students on a field trip. While traveling with them, the small school bus crashes deep within the snowy woods. With the driver dead, who was the only other adult on the trip, Matt dons his Daredevil costume and tries to lead the kids to safety by using the grappling line in his Billy Club to help guide the children. However, the snow and sleet proves too much for him and his "radar senses" and he passes out due to blood loss when his left leg was injured in the crash. The children band together, demonstrating how resilient they are by saving the "hero" and dragging him to a nearby farmhouse.

Following his shocking discovery about the Marvel Universe last issue, Daredevil has a weighty decision to make, the results of which will affect his friends and enemies both! Meanwhile, the Nelson and Murdock law offices struggle to celebrate the holidays as insurmountable problems descend upon them!

Retrieved from "https://heykidscomics.fandom.com/wiki/Daredevil_Vol_3_7?oldid=1420897"
Community content is available under CC-BY-SA unless otherwise noted.