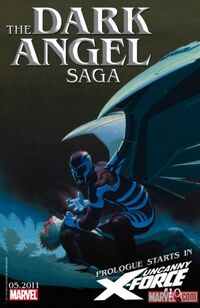 Origin
Apocalypse's death at the hands of Fantomex triggered an Ascension Protocol within the Death Seed that had been planted in Warren to turn him into Archangel. He began to become the new Apocalypse. While X-Force seeks a way to save their friend from his fate, they find they may already be too late...

X-Force became aware of Archangel's Ascension after Warren tried to kill a reporter, to whom Shadow King had delivered files on the secret team. To prevent his ascension, X-Force traveled to the Age of Apocalypse under the direction of Dark Beast after springing him from prison. They sought to claim a Life Seed to destroy the Death Seed within Warren. Teaming up with the X-Men of the universe, they managed to claim a Life Seed and return to their world, but not without unfortunate casualties for the X-Men.

However, they had been tricked; Dark Beast had been working for the Ascended Archangel all along. They returned to find Cavern-X overrun by Clan Akkaba, with Archangel at its head. X-Force had procured a Life Seed, which was exactly what Archangel desired. A Life Seed was crucial in his plans for the world. In the ensuing battle, Wolverine was gravely injured by Genocide, the son of Apocalypse. Psylocke surrendered herself, hoping to appeal to whatever was left of Warren.

Archangel revealed his plan to Psylocke as they reached Clan Akkaba's secret base in the North Pole. Using Genocide and the Doom Fountain, he would scour all life from the world, replacing it with new life grown from the Life Seed. As a test run, a small town in Montana was destroyed and regrown as Tabula Rasa. When X-Force's actions led to the demise of the Final Horseman of Death, Archangel determined to replace him with Psylocke. Gathering a Death Seed from the Dreaming Celestial, he transformed her into his own Death.

Retrieved from "https://heykidscomics.fandom.com/wiki/Dark_Angel_Saga?oldid=1565267"
Community content is available under CC-BY-SA unless otherwise noted.