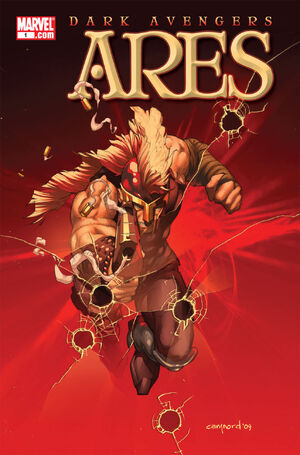 The chain of command. Rules of engagement. This Geneva Convention thing. Medical evac. Supply lines. The white flag. The Red Cross. Worrying about evacuees and refugees. Taking prisoners. Losing the battle but winning the war. Cursed diplomats. The proper standard of grooming. Sensible things like having enough bullets before you go into battle. That's the dung my sister cares about. I'm the other God of War.

Ares – the God of War! His relentless brutality ferocious, fighting skills and his bloodthirsty drive to attain victory at any cost earned him only scorn from his fellow gods in the Greek pantheon, and exile from Olympus. After thousands of years living as a man and fighting in man’s bloody, petty conflicts, Ares joined the ranks of Earth’s mightiest heroes – the Avengers. Now Norman Osborn – the new head of the corrupted Dark Avengers and director of the paramilitary intelligence agency H.A.M.M.E.R. – wants the finest fighting force the God of War can provide. He charges Ares with hand-picking an elite squad of soldiers and beating them into the hardest, sharpest warriors ever to wield an M-60 in each hand. And that’s exactly what Ares will need, when the goddess Hera provides him with a fighting chance to regain his standing in the pantheon’s eyes. And Ares is taking his men with him into the battle of their lives…

Retrieved from "https://heykidscomics.fandom.com/wiki/Dark_Avengers:_Ares_Vol_1_1?oldid=1421635"
Community content is available under CC-BY-SA unless otherwise noted.