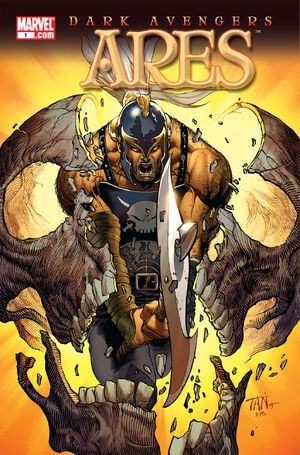 Ares and Team Shade act on intelligence that his son Alexander has been allowed to be hurt by Nick Fury. They attack an abandoned S.H.I.E.L.D. base and locate his son, but it's not Alex, it's Kyknos. Kyknos tells Ares that Pluto and Hera came to him in Hades and told him that he would be the new God of War, with all its rank and privilages, and all he has to do is kill his father. Which he's only too glad to do.

Retrieved from "https://heykidscomics.fandom.com/wiki/Dark_Avengers:_Ares_Vol_1_2?oldid=1421636"
Community content is available under CC-BY-SA unless otherwise noted.