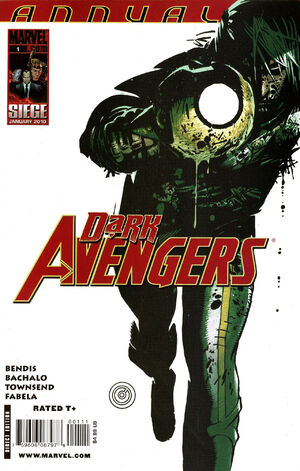 Bendis and Bachalo launch from the pages of New Avengers and reunite for this very important DOUBLE-SIZED chapter in the Dark Avengers saga. Captain Marvel a.k.a. Marvel Boy found out he was surrounded by madmen and villains and ran for the hills. But no one gets out of Osborn's grip that easy…Will a new hero rise in the Marvel Universe or will Captain Marvel be seduced to the dark side? Also, the Sentry's true self revealed!!

Retrieved from "https://heykidscomics.fandom.com/wiki/Dark_Avengers_Annual_Vol_1_1?oldid=1753411"
Community content is available under CC-BY-SA unless otherwise noted.