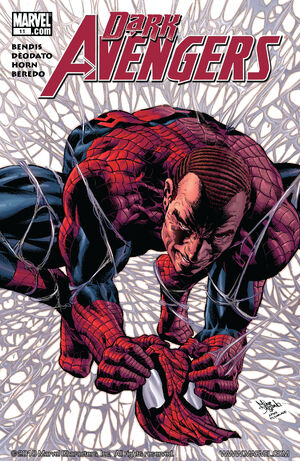 The explosive smash hit series from Brian Bendis and Mike Deodato continues!! The Dark Avengers are pitted against a foe they cannot defeat: A man with the power over every molecule in the world! Norman can't talk his way out of this one as the world gets turned upside down and no joke...someone dies. For reelz!

Retrieved from "https://heykidscomics.fandom.com/wiki/Dark_Avengers_Vol_1_11?oldid=1642173"
Community content is available under CC-BY-SA unless otherwise noted.