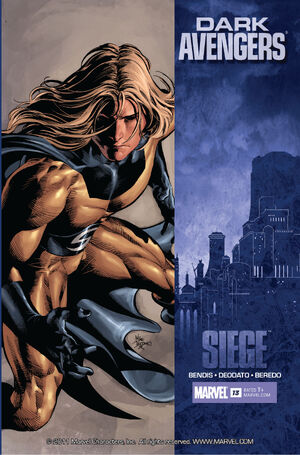 So you're not a hero. You're me. You're a force. Lindy was right. You're part of something bigger than both of us. You are God. ... You want to do something? You want to have an impact? Allow me. I've done it before. And something good always came out of it in the long run. Yes, sure. It's a messy thing. It's God's way.

In 1600 BCE, Moses warns the Hebrew slaves that God shall send the last plague: the death of the first born child. He instructs everyone to paint lamb's blood above their doors to spare their children. Up above, dark tendrils loom over Egypt.

In the 21st century, back to Osborn's talk with the Sentry, he gives him a serum made by the Professor. The Sentry gulps it down and with an explosion of energy, the Void reawakens. Osborn then leaves with the Void, telling him that he's his secret weapon. All the while, Lindy is wide awake, listening intently.

Sometime later, at the point where Lindy uses a ray gun to kill her husband, she finally relaxes, believing that she's free. She then tells CLOC to record the true origin of the Sentry. In truth, Robert Reynolds was actually a meth addict, a junkie. He and his friend broke into a lab looking for drugs. Robert himself found the Professor's serum and drank it, not knowing what it was. He fell backwards, spasming, before letting out an explosion of energy that destroyed the lab and killed his partner and two guards. When he wakes up, the Professor is there, lamenting over the destruction of his work. He then asks the creator of his powers to make more.

Lindy confesses to herself that she was swept off her feet by a superman, enjoying the connections the Sentry had to the Fantastic Four and other heroes. However, one night, she learned the truth of her husband's powers. She then realized that she married a monster, who may have awakened a power of Biblical proportions. Her last regret is that she should've killed Robert on their wedding night.

Unfortunately, her husband is not as dead as she thinks, for the Void has reasserted himself and regenerates the Sentry's body. Frightened, Lindy attempts to kill herself, only for the Void, interested in her theories surrounding his origins, destroys her gun. On her knees, Lindy begs the Void to kill her. However, Robert prevents his counterpart from doing that, reminding him of their deal: the Void doesn't touch her. He tries flying away, with the Void taunting him all the way, reminding him of how running, erasing everyone's memory of him, trying to ignore the Void or even flying to another planet didn't work. Robert tries to plunge himself into the sun, only for his flesh to regenerate. The Void calls him a coward. He also figures that he is a god. The Void then convinces Robert to allow him to be in control, pointing out that nothing he ever did had any good.

The last scene shown is the same dark tendrils, hovering over Manhattan.

Retrieved from "https://heykidscomics.fandom.com/wiki/Dark_Avengers_Vol_1_13?oldid=1420954"
Community content is available under CC-BY-SA unless otherwise noted.