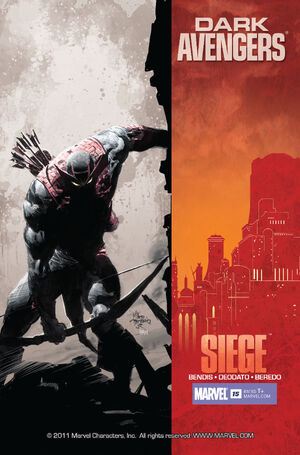 I mean, we all know your husband is nuts. But marrying you when he could be dating supermodels from numerous planets... now that is nuts.

During the Cabal's meeting in Avengers Tower over whether to send Asgard back to where it belongs, Doom is the only one who disagrees. Osborn summons the Void to threaten Doom back in line. The Void then blasted Doom when he refused.

Downstairs, Osborn tells Victoria Hand to evacuate the entire building, just as swarms of robotic locust unleashed from the Doombot infest the place. Osborn tells the Void to bring the Sentry, for the former can't be seen. While the Dark Avengers get on the Quinjet, Hawkeye gets Lindy Reynolds on a copter, while her husband goes to deal with the problem.

Hawkeye flies the copter over the sea. All the while, he has small talk with Lindy about her husband, before choking her to death and throwing her body into the ocean.

When the Dark Avengers return to the Tower, the Sentry having destroyed the Doombot, the latter demands to Hawkeye as to where his wife is. Hawkeye claims that she committed suicide, having become afraid of her husband. The Sentry turned into the Void, refusing to believe him and demands to know what he did. Hawkeye claims innocence and states that he was trying to save Lindy. Turning back into the Sentry, he flies off to find Lindy. Osborn then tells Hand to send a squad to assist him and then inform the White House that Latveria made a terrorist act. When asked if it is true, Osborn said that he wouldn't lie to the government. He then approaches Hawkeye, who gives him a smile. Watching this, Hand realizes what happened.

Retrieved from "https://heykidscomics.fandom.com/wiki/Dark_Avengers_Vol_1_15?oldid=1420956"
Community content is available under CC-BY-SA unless otherwise noted.