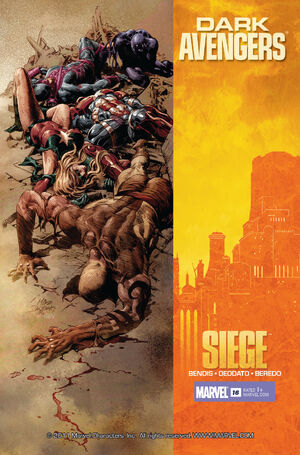 SIEGE BLOCKBUSTER TIE-IN!! Series Finale!! What?! Marvel's number one ongoing series is coming to an end?! What could possibly happen in the last chapter of SIEGE that is so intense as to bring this crazy chapter in Marvel history to a close??!! Well, clearly we can't tell you here but there will be a funeral and the fate of Norman Osborn Will. Be. Decided!!

Retrieved from "https://heykidscomics.fandom.com/wiki/Dark_Avengers_Vol_1_16?oldid=1651226"
Community content is available under CC-BY-SA unless otherwise noted.