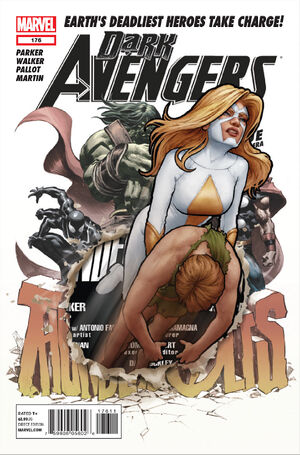 Appearing in "Whatever Happened To the Thunderbolts?"Edit

Synopsis for "Whatever Happened To the Thunderbolts?"Edit

The Thunderbolts suddenly find themselves having jumped back to the Pleistocene era. They re-group, attempting to find out why they keep jumping back in time and Centurius reveals that they have been caught in the pathways of other time travelers and that whatever is pushing them back is preventing them from locking onto the Moonstone as a guiding point. They find the traveler in the nearby sea fighting off sharks and Moonstone saves him, just narrowly managing to return to the tower before its next jump. It first takes them to the arrival of the Celestials on Earth but proceeds to jump again to the point when all life originated. They confront the traveler who reveals that he was thrown back in time by his former master and that he is from the 21st century. Meanwhile however, part of the habitat in the towers basement begins to leak into the primordial waters. This is revealed to be the Man-Thing who revealed that he by instinct was what kept pushing them backwards so that he could become the first sentience born on Earth. With the Man-Thing no longer interfering with their controls, the Thunderbolts are now able to return home but before they are able to activate the device itself, the traveler - who is revealed to be Doctor Doom - activates the mechanism in order to return to his own time period.

Retrieved from "https://heykidscomics.fandom.com/wiki/Dark_Avengers_Vol_1_176?oldid=1420959"
Community content is available under CC-BY-SA unless otherwise noted.