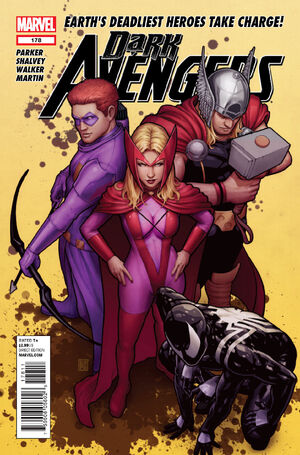 The Thunderbolts find themselves trapped in the future after Doom set their equipment to self destruct. Man-Thing - who was the source of their time travel capabilities - can not return them to the present either, since he was able to do it by intuition and now that he is sentient he is unable to remember how. He promises to try and return them but the Thunderbolts are suddenly attacked by Boss Cage. While Boss Cage and the Thunderbolts battle, a handfull of mutated creatures look upon the battle and decide to seize their opportunity to kill Boss Cage.

Meanwhile, Ragnarok attacks the sand construct of Shah but at the first blow it simply disintegrates, since it was just a message from Shah. The real attack comes shortly after, in the form of several monsters. The Dark Avengers dispose of them and resume their search for Wender. Toxie Doxie uses her new abilities to sense where Wender is, using a sample of his blood. She asks Ragnarok to take her up higher. Trickshot and Apaec exchange a look and then quickly latch onto Ragnarok and leave. Skaar and Cage are left behind but quickly leave in pursuit.

• The TimeStream-TravelingThunderbolts battle Dr. Doom in the past for the fate of the future!

• Skaar discovers the secret agenda of the Dark Avengers!

Retrieved from "https://heykidscomics.fandom.com/wiki/Dark_Avengers_Vol_1_178?oldid=1420961"
Community content is available under CC-BY-SA unless otherwise noted.