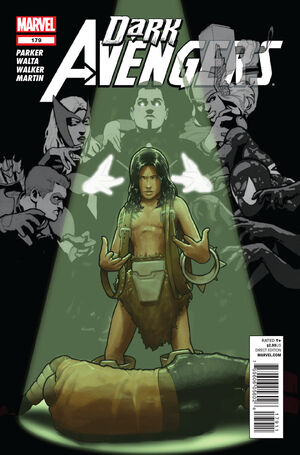 The Thunderbolts are fighting Boss Cage when several mutated creatures suddenly jump out and attack him. Cage is defeated but he triggers the self destruct sequence on his vehicle. The Thunderbolts are unable to stop it but suddenly find themselves teleported away. Man-Thing reveals that he was only trying to pull Moonstone away from the bike but on instinct, his teleportation abilities kicked in. The mutants reveal that they were put out there by Boss Cage - who is a clone of the grandson of Luke Cage - and try to recruit the Thunderbolts to help them kill him.

Ghost taps into the planets computer networks and reveals that events shortly after they left the present in the nation of Sharzhad led to a global cataclysm. An alien form of energy transfer irradiated the world and skyrocketed the mutation rate to the point where only mutants could reproduce and others had to be cloned. Large metro areas were separated by new force field technology creating so called "Mondo Cities". Captain America also created a whole Avengers Army composed of various super beings. They eventually donated their genetic material to the Mondo Cities so that the cities could arm their elite enforcement. They are interrupted by a message from Pym and Luke Cage who tell them of the transmitter they set up in Man-Thing's swamp that would act as a target signal for the Thunderbolts to return back to the present. In order to connect back to the signal however they need to get into the city and thus ally themselves with the mutations.

Meanwhile, the Dark Avengers track down and capture Wender. Luke Cage and Skaar; as well as Dagan Shar draw closer however. Trickshot tells Ragnarok to send a lightning bolt towards Skaar and Cage. The bolt draws the attention of Shah who proceeds to attack them instead. Skaar impales Shah during the battle and appears to have killed him but Shah simply pulls out the sword. Cage tries to convince Shah that they're there for the Dark Avengers and not Shah but Shah doesn't believe him. As Skaar is charging him, Shah reaches out with his mind and uses his abilities to turn Skaar back into his human form.

• Can history’s most Wanted villains save Luke Cage from his future?!

• Jeff Parker, Declan Shalvey and Kev Walker unite for an epic tale of one man’s destiny!

Retrieved from "https://heykidscomics.fandom.com/wiki/Dark_Avengers_Vol_1_179?oldid=1420962"
Community content is available under CC-BY-SA unless otherwise noted.