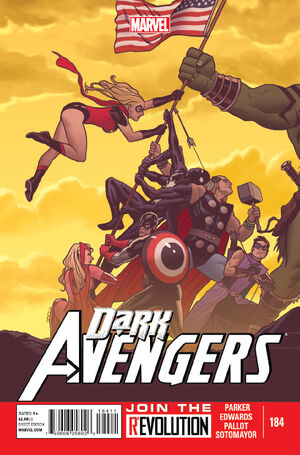 The Dark Avengers and Warden Walker have ended up in parallel world, captured by that world's Iron Man. Iron Man and Hank Pym wonder who they are, as they don't match their counterparts of their universe. Iron Man assumes that Mr. Fantastic is responsible for Ragnorak and flies off, while Pym stays behind to disable the Dark Avengers' control nanites and replace them with their own control devices. As he gets to work, Toxic Doxie begins to regain consciousness.

Meanwhile, Skaar regains his senses and asks himself how he got from Sharzhad to Manhattan. He is then attacked by a squadron of Iron Men, who assume him to be a cheap knockoff of the Hulk. He briefly fights them but an army shows up. Then someone grabs Skaar and carries him away. His rescuer is Moonstone. She explains that when the Quinjet fell out of the sky due to Doxie's sabotage, she flew up to intercept, at the same time, Man-Thing opened a portal to save them, but has sent them to another universe.

Before they could plan their next move, they accidentally stumble in Strangetown and are caught by its mystical defenses. As soon as Doctor Strange whisks them away, two men in yellow armor emerge from a portal, wondering who the two strangers were.

Meanwhile, Pym is trying to figure out how to restore a microscopic Wasp to normal size. He protect against her against a protozoan. Despite her pleas to be put out of her misery, he refuses, believing he can restore her. Then suddenly, his motor functions are controlled by Doxie, who forces him to free her before reworking his control implant to force him to serve her. She then asks about this universe's Iron Man's operation. Pym explains that Iron Man seeks out capable recruits to integrate into his armors. They never take them off, for the suits feed them and removes wastes. Upon hearing that the lab has a multitude of scientific endeavors, Doxie becomes intrigued.

Meanwhile, in Strange's Sanctum Sanctorum, he interrogates Skaar and Moonstone. As the former is deemed too dumb to pry answers with his magic crown, he tries it on Moonstone, who explains they come from another universe. Intrigued, Strange mind controls them both, intending to use the newcomers to tip the balance of his turf war in his favour.

• What force on this planet – nay, this universe – can turn Earth’s deadliest villains into heroes? • Brought to you by the titanic team of Jeff Parker and Neil Edwards, this Winter – Evil is our only hope!

Retrieved from "https://heykidscomics.fandom.com/wiki/Dark_Avengers_Vol_1_184?oldid=1420967"
Community content is available under CC-BY-SA unless otherwise noted.