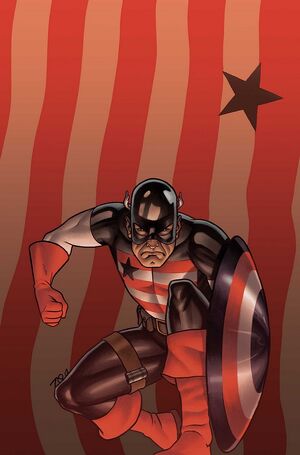 Appearing in "How Did I Get Here"Edit

Synopsis for "How Did I Get Here"Edit

In the Stark lab, June Covington learns more about the history of this world from her new toy, Hank Pym. Together, they use Stark teleportation tech to remove some device from Ragnarok's brain. Pym confesses that he was speaking to Janet at the microscope, and that he knows he could use Pym particles to return her to full size, but every time he tries it fails.

In Strangetown, Doctor Strange and Clea consider their captives. Strange alters Moonstone's appearance to that of Captain Marvel and tells Clea he will use them both in false-flag operations in other factions. He and Clea fall into a passionate embrace, which their pet Tigra eagerly joins. Moonstone tells Skaar to look away.

Two figures in yellow suits stand outside the Baxter building, contemplating a new security drone. They discuss whether to "attach the phase grapples and bring it back into our timeline" when they are caught by a security beam. One man is unable to escape, and his compatriot slays him and disappears before Reed can intercept. Reed Richards is aware that someone is manipulating him, but has yet to discover who.

Doctor Strange in astral form brings Moonstone to Yancy, the Thing's territory. She protests that she would help him willingly if he would send her home, but he replies that she is native to this dimension. The world is in a sad state, with New York the last patch of habitable land, and even Central Park has a massive crater in the center where, according to Strange, Thor and the Hulk killed each other. He tells her that the heroes are currently in a ceasefire but he thinks now he will be able to conquer everything. Under his control, she attacks and kills several monstrous creatures and then flees to the Iron Zone.

Within the Iron Zone itself, Clea's astral form is sending Skaar with one of the captured monsters. Rescue alerts Iron Man, who interprets this as an attack from Yancy. He sends Pym out to secure the borders, not noticing that June is free to roam as she pleases.

John Walker, the former US Agent, wakes up in the lab to find his body restored thanks to June and the Venom symbiote, which Stark and Pym had been keeping as a specimen.

Retrieved from "https://heykidscomics.fandom.com/wiki/Dark_Avengers_Vol_1_185?oldid=1420968"
Community content is available under CC-BY-SA unless otherwise noted.