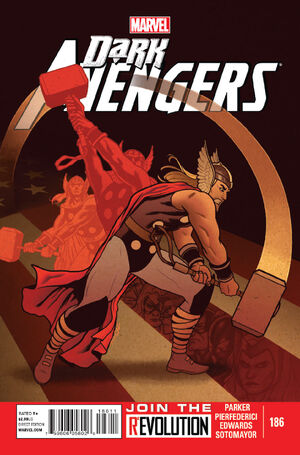 Appearing in "Back in Black"Edit

Synopsis for "Back in Black"Edit

Thanks to the manipulations of this world's Doctor Strange, Ben Grimm's monster army and Tony Stark's iron soldiers are in open war. Reed Richards teleports into the fray near Ben with a new android which can defeat his monsters and tries to get his old friend to stand down before all of New York's factions start fighting again. Unfortunately for Reed, his new android isn't Skaar-proof.

Trickshot wakes in Stark's lab to see U.S. Agent restored, Ragnarok still unconscious, and Ai Apaec in miniature form. June Covington brings them up to speed about the new world and they watch the battle on a screen in the lab. Reed, now seized by one of Ben's monsters, is trying to explain that he knows they're being manipulated and that the world in which they're living is a false one, but Ben is in no mood to listen and crushes Reed into submission.

The Dark Avengers watch the Yancy faction attack Tony's forces, and see Moonstone and Skaar among them. Ai Apaec sees the magical sign on them which reveals Doctor Strange's control. Abruptly the two armies are halted by a giant wave of water, brought by Namor and his queen, Sue Storm. The bloodshed during the conflict -- Thor, Captain America, Johnny Storm -- has pushed her over the edge. She tells Tony and Ben that she is going to end the conflict by flooding the entire city and gives them 24 hours to evacuate.

As the Dark Avengers receive this news, U.S. Agent suggests a plan. They will kill Strange to break his control over Moonstone and Skaar, and then use their assembled team to get to Reed Richards and hope he can help them get out of there.

But they do not know that they themselves are being watched -- by the men in suits who are somehow controlling that reality -- and who do not want to see that control broken.

Retrieved from "https://heykidscomics.fandom.com/wiki/Dark_Avengers_Vol_1_186?oldid=1420969"
Community content is available under CC-BY-SA unless otherwise noted.