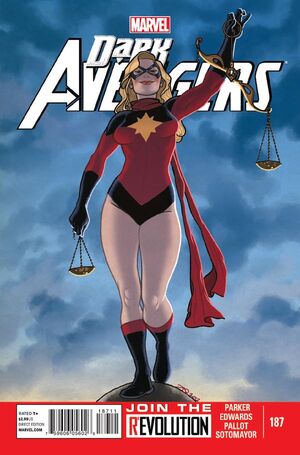 Appearing in "The World is a Dangerous Place"Edit

Synopsis for "The World is a Dangerous Place"Edit

In the alternate Earth, Reed Richards attempts to get through to Ben Grimm, who in this reality, had his mind devastated by a secondary influx of cosmic rays, but one of Grimm's monsters, Gronk, bites on his elastic torso and shuts him up. On the side, Skaar asks Grimm if he can leave and demands the slave spell on him be removed. Grimm orders that they bring in Moonstone. Upon seeing her, Grimm mistakes her for Alicia Masters. Richards encourages Moonstone to play along in hopes of getting through to him. Moonstone decides to go along. But when she claimed that she went out of town, Grimm becomes hostile, recalling that he witnessed Alicia's death. Moonstone attempts to escape, but Halar stops her. Grimm then summons his Moloids to bring Moonstone to a cell and ready her for gladiatorial combat.

Meanwhile, Iron Man returns to his tower to find that Hank Pym had been experimenting on Ragnarok, removing his control implant. He also notices that the other Dark Avengers are missing. When Pym mentions having regrown U.S. Agent's limbs and shrunk Ai Apaec, Iron Man lashes out at him and realizes that Pym's control implant had been reworked. A microscopic Wasp is watching this on her monitor in her petri dish, and begs to be wakened from her nightmare.

The Dark Avengers make their way through Hell's Kitchen to get to Strangetown. They then come upon a building covered in webs. Apeac guesses that this world's Spider-Man had gone under a profound change to have created a long-lasting web. They attempt to cross it, only to be attacked by Spider-Man's gang. Their Hawkeye mistakes Trickshot for his brother. Though U.S. Agent ask that they let them pass, Iron Fist attacks him, followed by Shang-Chi. Hawkeye goes after Trickshot and demands he surrender, only to be bitten by the diminutive Apaec, paralyzing him. He offers the killing blow to Trickshot, but his teammate has a better idea. He places Apaec on his arrow in hopes of getting another of their foes, but the spider-god tells him to fire him at Spider-Man. Trickshot complies. Spidey's spider sense goes off and he catches the arrow. Apaec hops off, suspecting he was right about him and talks to Spidey in a different language. Spidey repeats the same language. On the ground, all of the Dark Avengers are subdued.

Down below, Moonstone is pitted against all of Grimm's monsters. As she demands a better challenge, Grimm tells Halar to use lethal force. Skaar could do nothing but watch as Moonstone disintegrates.

• Trapped in a dangerous world, the Dark Avengers may have found the secret to returning home!

• But can they fight their way out of King Thing’s torture pit!

Retrieved from "https://heykidscomics.fandom.com/wiki/Dark_Avengers_Vol_1_187?oldid=1420970"
Community content is available under CC-BY-SA unless otherwise noted.