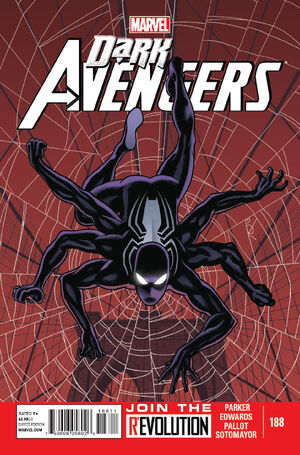 Appearing in "Agents of Thunder"Edit

Synopsis for "Agents of Thunder"Edit

On the unnamed alternate Earth, Ben Grimm's monster, Halar, is vaporizing Moonstone. Nearby, two hidden figures take note of Halar's destructive power and decide to take it, believing that replicating its energy attack would justify their whole project. However, Mr. Fantastic manages to reveals them, bringing them into phase. Skaar reacts quickly and grabs one of them before they could phase out. Skaar asks Mr. Fantastic if it's true that the mysterious group to whom their captive belongs to is manipulating this world.

In Hell's Kitchen, the Dark Avengers have been captured by Spider-Man's gang, who demand to know what they did to Hawkeye. Covington, communicating with Ai Apaic, explains that he's been poisoned on his left side and tells them to suck out the venom. Collen Wing quick moves into action. Shang-Chi then demands to know why Covington dresses like the Scarlet Witch. Misty Knight assumes that since they were heading for Strangetown, they must be working for Strange. U.S. Agent insists that they were going to stop Strange, who had restarted the turf wars, and save the whole city. Daredevil punches Trickshot, stating that there are no heroes anymore, just superhumans who fight each other constantly. Convington mentally suggests luring in their captors and gas them but U.S. Agent denies her, reasoning that her toxin would be blown away in the wind. Instead, he notes outloud that Hell's Kitchen has been kept independent of the other superhuman factions. Misty explains that Spider-Man had changed. His webbing doesn't stick to his allies, Grimm's monsters can't stand the smell of it and it screw up the Iron Men armors. Suddenly, the Dark Avengers are freed from the webbing, as Spider-Man doesn't consider them enemies and agrees to accompany them to Strangetown, along with a select few of his gang.

At Stark Tower, Pepper Potts announces that she needs some rest, with Sue Storm going to flood the city tomorrow. Rhodey asks Iron Man why he is so restless. His friend responds that he can't take a break without their foes attempting to evict humanity. Pepper asks that he look at her, reasoning that she hasn't seen his face in months. Iron Man ignores her and calls Pym to ask about the status of the neutron bomb, to everyone's surprise. Pym answers that he's using Ragnarok to power it.

Meanwhile, the division of AIM that has been manipulating this reality begin to panic with one of their own held captive. One beekeeper notes that because of the Dark Avengers' arrival into this reality, the solar system is slowly disappearing.

Back underground, Skaar pries off the mask off of his captive, who quickly pinches his noses for fear of contracting any viruses in this reality. Skaar then starts questioning them but the beekeeper refuses to talk. Mr. Fantastic asks why Skaar is working for Grimm. Struggling against Strange's slave spell, Skaar explains in broken sentences that he's from another Earth and that he's being controlled. Mr. Fantastic asks if his Fantastic Four is still a team on his Earth, to which Skaar confirms. He then turns his attention to the beekeeper and identifies him as A.I.M. and accuses him of warping time. But before they could get any further, Grimm interrupts and assumes that the beekeeper is another spy. He attempts to drag him to the arena, where he would be killed. To avoid letting their answers slip away, Mr. Fantastic goads Grimm into taking him instead by mentioning Alicia's name. As a frustrated Skaar looks on, he notices that Mr. Fantastic has written in the sand "Make him reveal access point".

Meanwhile, the Dark Avengers and Spider-Man gang arrive in Strangetown, where they are attacked by the All-Seeing Eye and the Soulsnake. Apaec tells Spider-Man to cast some webbing and give Trickshot a sword, which he uses to destroy the Soulsnake while Spidey lands a hard kick to the Eye. Unfortunately, Tigra ambushed Spidey, slashing him across the throat. Strange himself then appears, noting that it was worthwhile losing two valuable objects to bring down Spider-Man. Collen then asks U.S. Agent if he has a plan, to which he answers he's working on it.

Back at Stark Tower, Ragnarok awakens as Pym attempts to get his attention. But as Pym expresses relief that he's finally getting out of his lab, Ragnarok spots an invisible Moonstone, signalling him to remain silent.

• As a world crumbles, What’s up Moonstone’s sleeve?

• This March, Jeff Parker, Neil Edwards and Evil are our only hope!

Retrieved from "https://heykidscomics.fandom.com/wiki/Dark_Avengers_Vol_1_188?oldid=1420971"
Community content is available under CC-BY-SA unless otherwise noted.