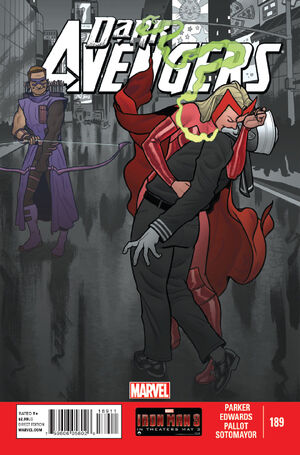 Appearing in "Agents of Thunder"Edit

Synopsis for "Agents of Thunder"Edit

On the alternate Earth, Ben Grimm is in the process of mangling Reed Richards, ignoring his old friend's insistence that their reality is being manipulated. Grimm then turns his attention to Skaar, who is in the middle of interrogating the AIM agent, guessing that he's from his Earth, as to how to return home. Strange's slave spell forces him to obey. Grimm accuses him of being in league with Richards and orders him to show his loyalty: to men or monsters.

At Stark Tower, Moonstone materializes before Pym and Ragnarok. Pym asks how did she get in. She explains that when Grimm's monster attempted to vaporize her, her intangibility powers kicked back in and she escaped. This also weakened Strange's spell on her as long as she stayed intangible. She then asks Pym as to where the other Dark Avengers are. He shows her recordings of them planning to kill Strange. Pym then says he needs to finish restoring his microscopic wife, Wasp, before asking if he can come with her. Suddenly, they are interrupted by Iron Man and attacks. With the slave spell attempting to reassert it's hold on her, Moonstone goes intangible as Iron Man hits Pym. Out of his arms pop more weapons, but Ragnarok gets up and attacks him. He tears off his left arm, revealing "Iron Man" to be a robot, or so it seems. After knocking off his head, it is revealed that Iron Man is just a brain in a jar, which ejects out of the chest and flies off. A badly wounded Pym confesses that Stark had him remove his organs to make more room for weaponry. Moonstone then tells Ragnarok that they have to help the others. The Thor clones confesses that he no longer possess his faux Mjolnir, but that gives Moonstone an idea. As they leave, Pym throws a switch to activate the Pym Particles.

As Grimm orders Skaar to kill Richards, in Strangetown, Iron Fist attacks Strange out of rage for the death of Spider-Man, only to charge into a trap. Strange conjures a maw on his chest and engulfs Iron Fist, consuming his focused chi. Meanwhile, Ai Apaec is climbing Strange's leg, telepathically calling the Dark Avengers to summon an object contained by Spidey's webs, which would grant him the perfect distraction.

There is little Skaar can do to resist. As Grimm shouts at him to kill Richards, Skaar asks why can't he do it. Despite his hate for his old friend, Grimm can't do it himself, so he orders Skaar to do it and the slave spell is compelling him to obey.

U.S. Agent tells Misty Knight to summon Captain America's shield with her bionic hand. The shield comes flying in, just as Strange conjures up a deadly spell, only for it to deflect off the shield and kill Clea. Enraged, Strange readies an even more powerful spell, but Apaec hits him with all the poison he had, killing the Sorcerer Supreme and ending his slave spell on Moonstone and Skaar. At that moment, Skaar turns on Grimm.

As Moonstone and Ragnarok arrive at the sight where this Earth's Thor died fighting the Hulk and where his Mjolnir lies, the AIM cell is observing Iron Man's brain inserting himself into a massive armor. One beekeeper wants to continue observing but another warns that this reality's going to collapse in less than an hour. Thus, AIM mobilizes to finish their work.

Ragnarok acknowledges that he's just a copy of the real Thor and that he does not know who or what he is. He then grasps the hammer. Lightning then strikes and Ragnarok emerges with a new look.

• The penultimate chapter of dark heroics is here!

Retrieved from "https://heykidscomics.fandom.com/wiki/Dark_Avengers_Vol_1_189?oldid=1420972"
Community content is available under CC-BY-SA unless otherwise noted.