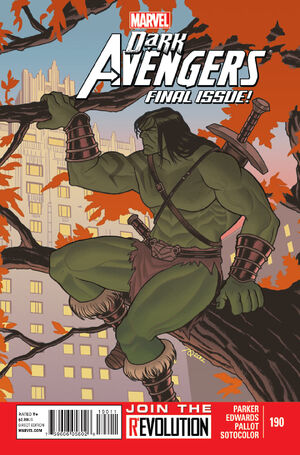 Appearing in "The Final Hour!"Edit

Synopsis for "The Final Hour!"Edit

As Namor and Sue Storm arrive to wipe Manhattan off the globe, in Midtown, Skaar is punched up from underground by Ben Grimm for his betrayal. In the chaos, Mister Fantastic recaptures the A.I.M. and demands answers otherwise he'll choke him to death.

As Grimm's monsters relentlessly attack Skaar, June Covington manages to make telepathic contact with him, promising to send him help, even though he refuses it.

Elsewhere, Iron Man unleashes his largest and most powerful armor against Namor and Sue.

Before Grimm could have Halar execute Skaar, Moonstone appears and gloats that she's invincible. Grimm retorts that he'll kill her one way or the other by sending Lugner after her. And right on cue, Ragnarok comes crashing down, devastating Grimm's monster.

As Stark gloat about the superiority of technology, Rhodey decides that he's lost it and tells the other Iron Men to follow him and escape the city. However, Stark had heard that and forces Rescue to kill him before ordering his soldiers to go to Yancy and finish off Grimm.

Grimm focuses on Skaar, intent on beating him to death, only for U.S. Agent to intervene, who hands Skaar his sword, which Spider-Man found, enabling him to impale Grimm. At the same time the Iron Force arrives. U.S. Agent calls the Dark Avengers together and tells them that they must find Mr. Fantastic. Luckily, he comes right to them. He reveals from his interrogation of the A.I.M. agent that the beekeepers he belongs to had been secretly altering this reality. It all began when Kang the Conqueror attacked the Avengers. The A.I.M. sect calculated that he was due to return soon and established a base a block from Avengers Tower. As Kang kept attacking, A.I.M. was able to capture a "sliver of time", enabling them to alter the history people in it. This alternate reality was a running experiment to A.I.M., studying outcomes and gathering any weapons that were developed back into real time. But since the Dark Avengers came here, people from the real time that progressed, the sliver is starting to collapse and will end their nightmare.

Just then, Iron Man arrives, having heard the whole thing and doesn't believe it and throws Sue towards them. He demands that everyone either serve him or die. He then takes note of his Iron Force arriving when they should be fighting the monsters and states that they can't disobey him. Rescue remarks that he said to destroy all monsters. At that moment, a giant-sized Wasp attacks, enraged at his murder of her husband and tears his armor apart. Stark's brain flies out, intent on getting to a new body but Trickshot swiftly kills him; he remarks that not even Hawkeye could do that but someone else says he could've.

U.S. Agent asks Mr. Fantastic if there's no way to undo the damage. The latter confesses that the sliver is close to disintegration and as the Dark Avengers did not originate from it, they'll die if they stay. As the sliver dies, all the people in it will fold in with real time that actually happened and everyone will think that this was all a bad dream.

The Dark Avengers race to find the A.I.M. base. Their arrival is detected and the beekeepers attempt to close the sliver gate but Ragnarok manages to keep it open for the entire team to enter. They then find the controls for the sliver of time and accelerate its destruction. The beekeepers offer to cooperate and surrender in exchange for fair trial. However, the Dark Avengers aren't interested in arresting them.

Ten minutes later, the Dark Avengers arrive back in their world. Glad to be back and wanting never to see the Dark Avengers again, Skaar hops away. The rest of the team ponder what to do, as most of them are still criminals. Covington then bewitches U.S. Agent, making him think that they could still work as a team. However, Ai Apaec reminds them that he must be restored to his proper size, but Covington steps on him. U.S. Agent then leads the Dark Avengers for their next adventure.

• The secret of the dark Earth are revealed! • Who will live? Who will die? Will anyone get back to Earth alive? • Jeff Parker wraps up his acclaimed run on Earth’s Deadliest Heroes!

Retrieved from "https://heykidscomics.fandom.com/wiki/Dark_Avengers_Vol_1_190?oldid=1420973"
Community content is available under CC-BY-SA unless otherwise noted.