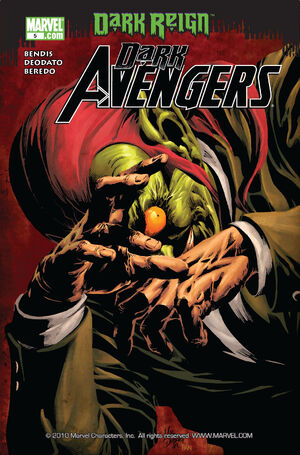 Norman is conducting an interview, talking about his past, present, and future. He manages to sweet-talk the media into thinking that he's gotten over the Goblin. He also denounced Clint Barton's accusations of treachery and fraud against America itself.

Flashing to six hours ago, Osborn talks down the Sentry, reminding him that there is no Void. When the Dark Avengers return to Avengers Tower an hour later, Hawkeye and Venom start arguing about the former threatening to kill the latter. Ares stops the fight, threatening to punish him like a child. Sometime later, Moonstone sleeps with Noh-Varr. But when she lets that Osborn's Avengers are composed of murderers and psychotic criminals.

Meanwhile, in Los Angeles, the city is attacked by Atlanteans. The attack is reported and Osborn is informed.

Retrieved from "https://heykidscomics.fandom.com/wiki/Dark_Avengers_Vol_1_5?oldid=1420946"
Community content is available under CC-BY-SA unless otherwise noted.