Part of the 'Utopia (Event)' event 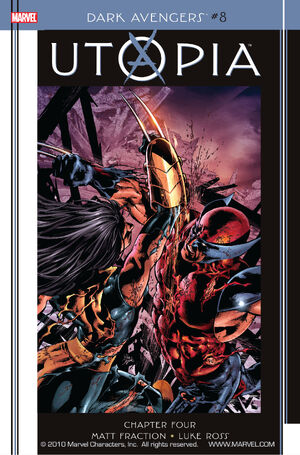 Norman's X-Men, as led by Emma and Namor, are the face of mutant law and order! The X-Men look played out of position as Osborn's dark reign falls over California-- but Scott Summers isn't done yet. The X-Men strike at Norman, at H.A.M.M.E.R., at his fraud X-Men and his sham Avengers all at once! This is the book where, at long last, the Marvel Universe starts to fight back-- and it sets the stage for next month’s unbelievable conclusion in UNCANNY X-MEN/DARK AVENGERS - EXODUS!

Retrieved from "https://heykidscomics.fandom.com/wiki/Dark_Avengers_Vol_1_8?oldid=1770271"
Community content is available under CC-BY-SA unless otherwise noted.