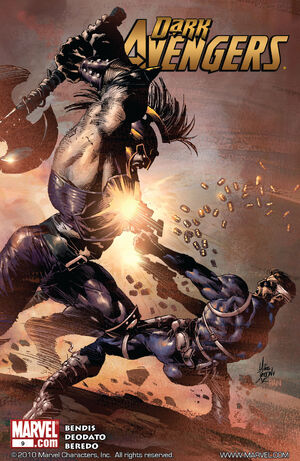 Poor Marvel Boy... he had no idea how sinister a gang the Dark Avengers actually is. And now he is running for his life. And poor Ares, he has no idea where his son goes while he is off being an Avenger. And now he is going to find out. And when he does... there will be hell to play. Guest-starring Nick Fury and the Secret Warriors. Oh, you heard that right. Ares versus Nick Fury! You know when Stan used to say 'nuff said? This is the kind of thing he was 'nuff saiding about!

Retrieved from "https://heykidscomics.fandom.com/wiki/Dark_Avengers_Vol_1_9?oldid=1739664"
Community content is available under CC-BY-SA unless otherwise noted.