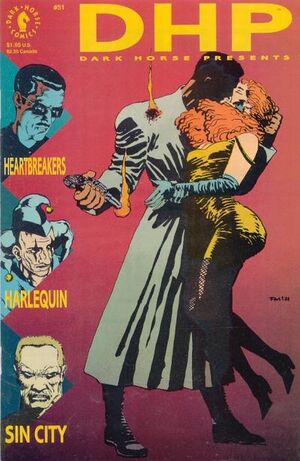 This issue starts off with a bang as Dark Horse Presents showcases the short second installment of a new regular feature, Sin City, created, written and illustrated by none other than Frank (Give Me Liberty/Hard Boiled) Miller. Anina Bennett and Paul Guinan continue Heartbreakers as they fierce female clones find their asteroid base under attack by their old enemies from Earth. Also, Stephen Csutoras and Stefano Gaudiano bring Harlequin to its poignant conclusion and, in "The Burning Man," writer Ed Brubaker and artists Jeff Ranjo and Michael Christian cast their minds back to a not-so-innocent childhood.

Retrieved from "https://heykidscomics.fandom.com/wiki/Dark_Horse_Presents_Vol_1_51?oldid=1422517"
Community content is available under CC-BY-SA unless otherwise noted.