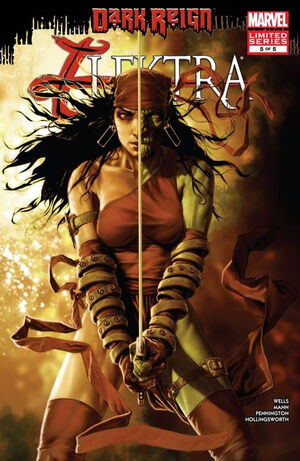 I am Elektra Natchios. Not even the stars are safe in the sky.

Elektra finds her answers! As her quest for survival races toward its conclusion, the world’s most dangerous assassin discovers why every other killer in the world is gunning for her. Who put the 82-million-dollar price tag on her head? What was her impostor responsible for while Elektra was held captive? What will Elektra do about it?! By Zeb Wells (AMAZING SPIDER-MAN) and Clay Mann (DAREDEVIL)!

Retrieved from "https://heykidscomics.fandom.com/wiki/Dark_Reign:_Elektra_Vol_1_5?oldid=1516255"
Community content is available under CC-BY-SA unless otherwise noted.