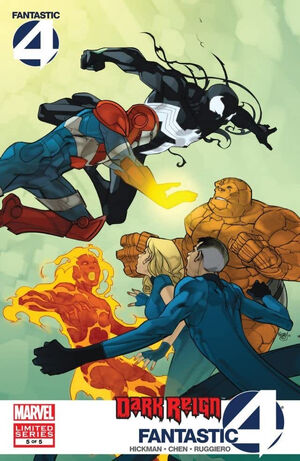 Appearing in "The Bridge, Chapter Five"Edit

Synopsis for "The Bridge, Chapter Five"Edit

Norman is trapped in the Baxter Building with a very upset Susan Richards. She puts up a force field that locks everyone else out and him in. He pulls a gun and is about to shoot Reed, when Franklin shoots him first with a toy gun. They ultimately let Norman go, and Sue tells Reed to destroy The Bridge. He does so, but then secretly puts it back together, and meets beings from another reality who tell him how he can fix things.

Retrieved from "https://heykidscomics.fandom.com/wiki/Dark_Reign:_Fantastic_Four_Vol_1_5?oldid=1729772"
Community content is available under CC-BY-SA unless otherwise noted.