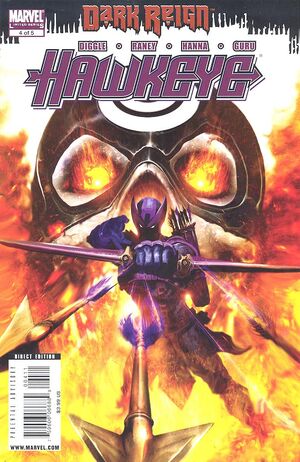 From the pages of DARK AVENGERS! As Ben Urich learns the awful truth about the terrorist cell operating in New York City, Hawkeye finally confronts the mysterious antagonist who's been haunting his dreams. But is he just a figment of Bullseye's diseased imagination? And if so, where the hell did all these dead bodies come from? You want some wicked Dark Reign fun? The dastardly duo of Andy Diggle (THUNDERBOLTS) and Tom Raney (SECRET INVASION: INHUMANS) hit the mark!

Retrieved from "https://heykidscomics.fandom.com/wiki/Dark_Reign:_Hawkeye_Vol_1_4?oldid=1421662"
Community content is available under CC-BY-SA unless otherwise noted.