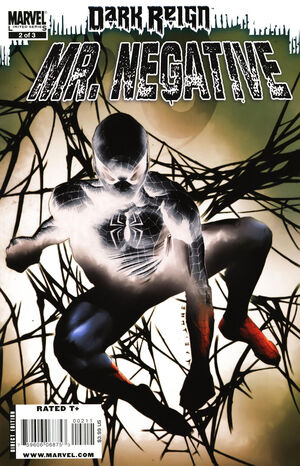 Appearing in "Battle for Chinatown"Edit

The streets of Chinatown run red with blood as The Hood sends in his entire villain army to take out the Last Villain Standing who refuses to submit to his rule, Mister Negative! The only thing that can save him is the latest ruthlessly violent enforcer he's converted to his cause: THE AMAZING SPIDER-MAN, that show his negative side defeating without any mercy Mister Negative enemies.

At the End, the Hood and Mister Negative engage in battle for the crime in Chinatown

Retrieved from "https://heykidscomics.fandom.com/wiki/Dark_Reign:_Mister_Negative_Vol_1_2?oldid=1430565"
Community content is available under CC-BY-SA unless otherwise noted.