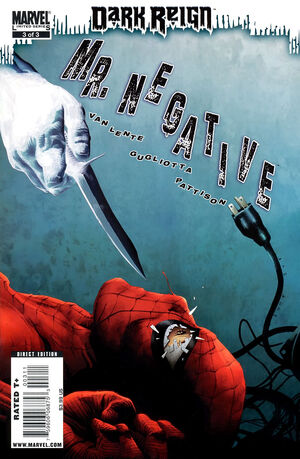 With THE HOOD and MR. NEGATIVE locked in a battle to the death, BETTY BRANT is poised to unlock the secret origin of the Chinatown's lord of crime, and to stop her he has sent his newest corrupted enforcer to end her life-- PETER PARKER, the Lacerating SPIDER-MAN!

Retrieved from "https://heykidscomics.fandom.com/wiki/Dark_Reign:_Mister_Negative_Vol_1_3?oldid=1730103"
Community content is available under CC-BY-SA unless otherwise noted.