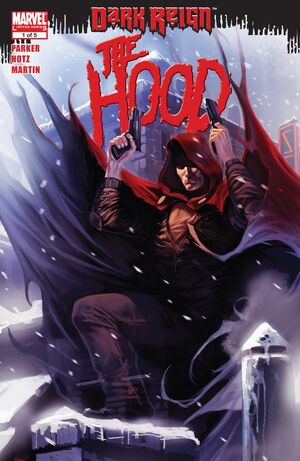 Don't go down that fast. I've been hunting you too long to end it like that. Now get up...so I can put you in the ground.

The Hood and his criminal gang steal a treassure from and Arabic diplomat. Then they have a celebrating party were the Hood shows them how he's the leader and the ways he delegates the job. At the end of the meeting, Parker Robbins goes to his house with his wife and daughter. His wife ask him to don't hurt anybody if he's breaking the law. Later the next night when the Hood is going to do a job, he's attacked by White Fang (Elizabeth Bondi).

Retrieved from "https://heykidscomics.fandom.com/wiki/Dark_Reign:_The_Hood_Vol_1_1?oldid=1420987"
Community content is available under CC-BY-SA unless otherwise noted.