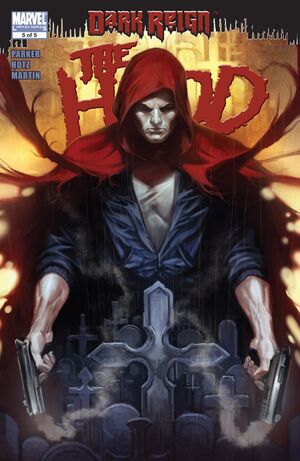 Appearing in "Chain of Command"Edit

Everything comes to a head in this fiery finale, as The Hood tries to hold together his mob, his family, and his sanity…and he will definitely lose at least one! Plus: Parker Robbins learns more about his relationship with the malevolent Dormammu, and just who has been betraying him! It’s your chance to take one more look at the human side of the man in the center of the Dark Reign!

Retrieved from "https://heykidscomics.fandom.com/wiki/Dark_Reign:_The_Hood_Vol_1_5?oldid=1753801"
Community content is available under CC-BY-SA unless otherwise noted.