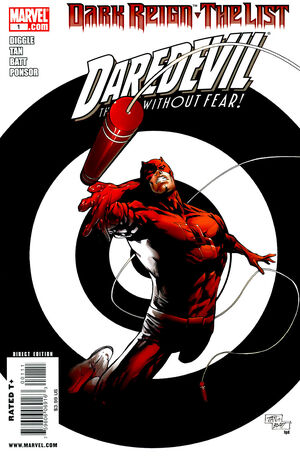 After the shocking events of DAREDEVIL 500, Norman Osborn’s eyes turn to Hell’s Kitchen – and he doesn’t like what he sees. Now Osborn dispatches the only assassin he can rely on to kill Daredevil – Bullseye – but all is not as it seems. It’s a fight that’s been brewing for years…featuring the DAREDEVIL debut of writer Andy Diggle, and the superstar talents of artist Billy Tan! Plus, a preview of Daredevil #501, Andy Diggle's first issue of DD, and character designs!

Retrieved from "https://heykidscomics.fandom.com/wiki/Dark_Reign:_The_List_-_Daredevil_Vol_1_1?oldid=1730282"
Community content is available under CC-BY-SA unless otherwise noted.