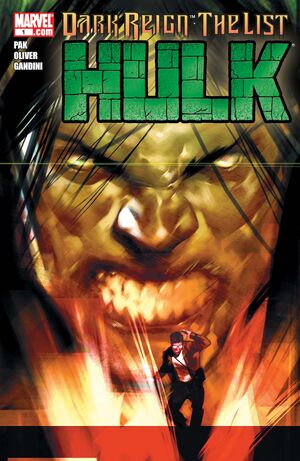 Norman Osborn thought he had a plan for keeping the Green Goliath from mussing his wavy coif -- but he forgot about the Hulk's most dangerous incarnation. Now the H.A.M.M.E.R. comes down as Banner and Skaar face Osborn's deadliest femme fatales in a monumental battle of brawn and brains. Plus a reprinting of Amazing Spider-Man #14, the first appearance of the Green Goblin & guest-starring The Hulk.

Retrieved from "https://heykidscomics.fandom.com/wiki/Dark_Reign:_The_List_-_Hulk_Vol_1_1?oldid=1753384"
Community content is available under CC-BY-SA unless otherwise noted.