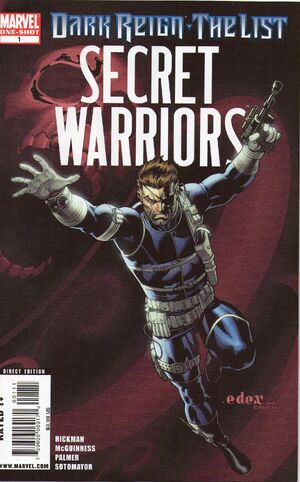 If it goes bad, I put a bullet in * you… then I run like hell to Dum Dum and tell him to start the clock. Endgame.

Nick Fury sneaks into Avengers Tower and wakes up Norman Osborn from his own bed, stating that he's here on a matter of national security. Osborn shows his his list, which details what he plans to do to certain people, which includes controlling the world and kill Fury. Fury shows his own list: save the world, punch Osborn in the face, have a beer. But Fury tells him that they have more important matters to take care of.

H.A.M.M.E.R. agents apprehend Seth Waters from the Department of Treasury before he could commit suicide. Once he's in custody, Victoria Hand briefs both Osborn and Fury that Waters has been secretly funneling money to an unspecified location. All what they recovered from his office was some kind of data storage device. Osborn tries interrogating Waters to see if he's with Hydra, but Waters smugly states that the people he works for are much more powerful than either Hydra or H.A.M.M.E.R. Unsatisfied, Osborn sends Bullseye in to torture Waters with toothpicks. While behind the two-way mirror, Fury persuades Osborn to hand him the device, since he's not going anywhere. Soon, Bullseye manages to pry an answer out of Waters, who admits that he works for a group called Leviathan. Having his answer, Fury then gives the signal to Garrett to blow Waters' head off. Fury then punches Osborn in the face. Garrett provides cover fire for Fury as he escapes to his flying car. Ares aids in their escape by taking down two pursuing helicopters.

Once they are safely at a safehouse in Rome, Fury accesses Waters' device.

Retrieved from "https://heykidscomics.fandom.com/wiki/Dark_Reign:_The_List_-_Secret_Warriors_Vol_1_1?oldid=1498342"
Community content is available under CC-BY-SA unless otherwise noted.