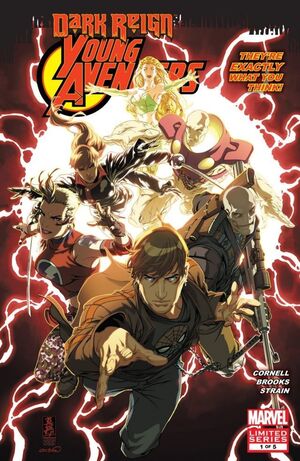 Guys, seriously, give it up. You know who you're facing here? Only New York's leading super heroes! You are in a fight with the latest, the greatest -- Young Avengers!

Four crooks rob a convenience store. However, their escape is barred by a a group of teens calling themselves the Young Avengers. The crooks open fire only for their bullets to be melted by Melter or magically teleported away by Enchantress. Big Zero then stomps one of the thieves, Executioner viciously shoots another, Enchantress transforms the next into a dog and Egghead sets the last one in a thirty years coma. The Young Masters then escape the police to take a drink at a bar. But when the cops follow them, Enchantress teleports them back to the Invisible Manor in Central Park. Once they arrive, Melter gathers his team to discuss what happened recently but no one wants to care.

Next day, Melter tries to convince Coat of Arms to really act like heroes; she points out that it is a controversial issue. Melter then contemplates her words. Just then, an old lady trips and spills her groceries. He attempts to help her but she presumes him to be a mugger an sprays him. By accident, he uses his melting powers, turning the old lady into a puddle. He becomes even more freaked when two men passing by step in and don't notice. In shock, he hurries back to the Invisible Manor. But when he arrives, the first team of Young Avengers have just teleported in, ready to confront his team.

Retrieved from "https://heykidscomics.fandom.com/wiki/Dark_Reign:_Young_Avengers_Vol_1_1?oldid=1430502"
Community content is available under CC-BY-SA unless otherwise noted.