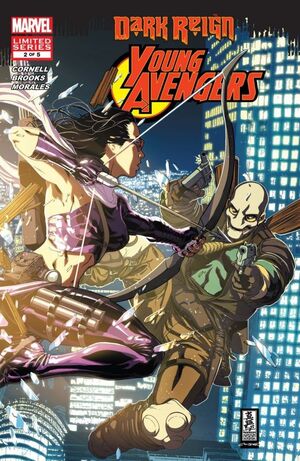 Here's the deal -- You guys want to be 'Young Avengers -- I say you have to earn it. You guys have to choose. You can try out to join us. Or you can find yourselves another name.

The New Young Avengers are surprised to see the first Young Avengers in their hideout. Immediately, a fight breaks out. Patriot demands that Melter tell his team to stand down. The fight soon stops when the Enchantress uses a spell; Wiccan realizes that she is very powerful. Patriot then tells Melter that they are here about their "name". Melter snaps that they don't own the name Avengers, especially with different teams everywhere. He also demands to know how they found their hideout; Patriot states that their "discipline and professionalism".

Flashing to a few hours earlier, the first Young Avengers are viewing the live footage of the announcement of Osborn's Avengers and also the report of the new Young Avengers. They decide to deal with the latter, as Wiccan chants a spell to locate them.

In the present, Patriot demands to know if Osborn put them up to this. Coat of Arms admits it, for he's partially responsible. She explains that she one day met the man in a factory, have admired him as the Green Goblin. She showed him images she got of him as the Green Goblin on her iPod, unfortunately enraging Osborn and makes it clear that his outburst never happened. She then decided to get a team of Young Avengers. Patriot then says that they have to earn the name Young Avengers. They either join the first group or find themselves another name and states that they'll be back tomorrow.

As soon as they first Young Avengers teleport back to the Avengers Mansion, they make a few comments on this new team; Speed admits that he knew Coat in juvie.

Meanwhile, the other Young Avengers don't think so highly of Patriot's ultimatum.

Later, Melter and Enchantress have a talk about leaving for somewhere else. The latter states that it is her destiny to be a Young Avenger and to remain by his side. As they sleep, Melter could only think of having his team merged with Patriot's but his daydream includes the puddle that was the old lady he accidentally melted.

Executioner calls his mother, who is revealed to be Princess Python, that he's met Kate Bishop and tells her that he's going to show what the real world is like.

Retrieved from "https://heykidscomics.fandom.com/wiki/Dark_Reign:_Young_Avengers_Vol_1_2?oldid=1501142"
Community content is available under CC-BY-SA unless otherwise noted.