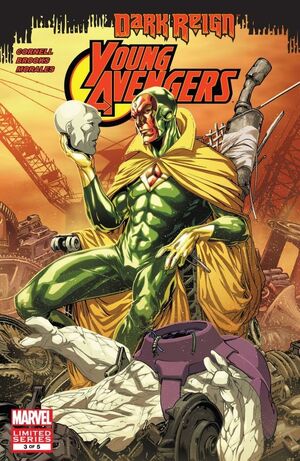 Norman Osborn was sent to test the Marvel Universe, and now he's testing the Young Avengers, both wannabees and established, by sending his best and brightest against them, to show them that no good deed goes unpunished, and no bad deed unrewarded. And that dear old lady is still dead. And those tattoos indicate fascism. And the deeper the Young Avengers look into the group that would be them, the deeper that group looks back.

Retrieved from "https://heykidscomics.fandom.com/wiki/Dark_Reign:_Young_Avengers_Vol_1_3?oldid=1727413"
Community content is available under CC-BY-SA unless otherwise noted.