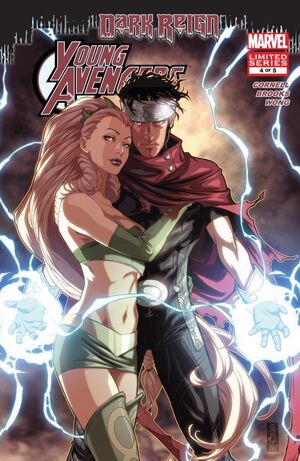 Yeah. Hi again. You remember you were kind enough to test us, to see if we were ready to join your team? Here's where we return the favor. Meet Norman Osborn's Avengers. The real Avengers.

A charity party is being hosted and Executioner has brought Kate Bishop as his date; his mother, Zelda Dubois, aka Princess Python, asks if they are dating, to which he reacts embarrassed. Then suddenly, the Young Avengers crash in, chasing a purple-costumed villain; among them is Hawkeye. "Hawkeye" compliments Kate on her dress. This leaves Executioner with further doubts about her identity.

Later at Avengers Mansion, it is revealed that "Hawkeye" was actually the Vision and the villain was Wiccan.

Next day, the Young Avengers arrive at the Invisible Mansion, informing the Young Masters that only Enchantress and Coat of Arms are permitted to join their team -- on a provisional basis. Melter reacts badly to this, as he expected for everyone on his team to join. On the side, Executioner lashes out at Hawkeye for making a fool out of him in front of his mother. She snaps back that his mother is a supervillain.

Patriot tries to tell Melter that they want to see what things would be like if he had no attachments to lead the team. Melter rebuffs him. Concerned, Patriot asks what wrong with him.

Later, Executioner expresses his disgust for the Young Avengers to treat like this. He believes that they should be lording over them. He then runs off.

As night falls, Melter can't sleep, remembering when he accidentally melted his parents. He gets out of bed and walks around the mansion, before discovering Osborn's number in Coat's room. He dials the number, unaware that Coat is watching.

Twenty minutes later, Osborn comments on how his card can spread nanocameras through the Invisible Mansion to Loki. He also asks if the Enchantress is an Asgardians. Loki confirms it, elaborating on how she created a mortal who believes herself to be like her. Osborn then counts his blessing, how many superhumans can join him.

Back in the Invisible Mansion, Coat revelas herself to melter, asking if he, who has a villain's power, can truly become a hero.

Next day, the Young Avengers show Enchantress the Avengers Mansion. Wiccan then tries training her in proper use of her powers. However, she attempts to flirt with him. Wiccan weakly says that he's already seeing someone and is very gay; she doesn't care.

Speed and Coat meeting in a park, subtly informing him that something is going to happen soon and tells him to "get away". However, Speed is determined to warn his teammates and asks what makes her think that he is not going to tell them right away; she answers that this "thing' will find them sooner or later. This shows that her view on the world of heroism.

Meanwhile, Princess Python is on the phone with Executioner, expressing her disappointment that he wasn't able to hook up with Kate Bishop, whose family connections could've been useful. When she reaches her car, she finds a window smashed and a bomb inside. Executioner then said over the phone that he knows she's a villain. The bomb then explodes.

Vision and Stature are on a date. Then suddenly, Egghead appears and downloads an extreme amount of data into the Vision about Enchantress.

An hour later, Enchantress has run back to her team, having been "thrown" out by the Young Avengers for no reason. This is the tipping point for Melter, who tells his team that with their other "guests", they'll show the Young Avengers. His guests were in fact the Dark Avengers.

Retrieved from "https://heykidscomics.fandom.com/wiki/Dark_Reign:_Young_Avengers_Vol_1_4?oldid=1421000"
Community content is available under CC-BY-SA unless otherwise noted.