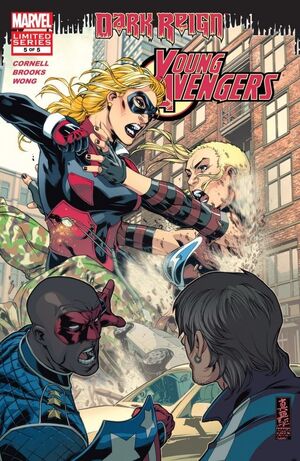 Osborn... You didn't just steal the name 'Avengers'... You stole my name, 'Iron Patriot.' And the word 'hero.' And the costume you wear. And that flag you sprayed on it. But you're not a hero. You're not a patriot -- and you are NOT an Avenger!

The Young Masters stand with the Dark Avengers against the Young Avengers. Osborn then declares that he's going to be the one who decides whose an Avenger or not. However, Patriot disagrees and declares that they will fight to see who an Avenger. The battle breaks out, with different types of combat being thrown at one another. Enchantress engages in battle with Wiccan, accusing him of rejecting her out of his team; he defends that they had to get her away from their base, because she doesn't know what she is; Hawkeye tangles in a ranged weapons fight against Executioner and Bullseye; Hulkling proves to be immune to Daken's pheromones; Vision and Egghead go head-to-head. The former demands to the latter if he knew about what Enchantress is; the reason why they had to expel her is to prevent her from examining the Avengers Mansion's magical defends. However, Egghead isn't intent on talking; Stature and Big Zero wrestle with increasing height, before the former beats the other up; Speed easily defeats Melter; Patriot combats Osborn, accusing him of tarnishing the name of the Avengers. He then brings down the Iron Patriot with one punch, though he broke his hand. This act makes Melter reconsider joining Osborn. The latter wants to prove him wrong by calling in the Sentry.

Wiccan informs Enchantress that she is a creation of Loki. However, he tells her that she can chose for herself. With Coat of Arms, who was not involved in the fighting, they magically bind the Sentry in chains and send him through a vortex. Melter then realizes that he picked the wrong team, presuming that they killed the Sentry; Patriot corrects him: they banished him. He demands to Melter when is he going to wake up and choose

Meanwhile, Hawkeye manages to outclass Bullseye. He pulls out one of his trick cards, while telling her that Executioner killed his mother. Executioner shoots him for saying that. Hawkeye turns her attention to him, warning him that Bullseye will kill him for that and asks him to stop with the killing. He refuses, stating he's making a commitment. He attempts to shoot her, declaring that they are their masters.

Melter tells Enchantress to take them away from this battle; Speed and Coat simultaneously asks each other to join their respective teams, to which they both refuse. They kiss each other goodbye. The Young Masters then leave. Osborn then declares that none of this was part of Avengers history.

In the New Invisible Mansion, Coat is having a cartoon-style dream of her dancing with the Green Goblin.

Retrieved from "https://heykidscomics.fandom.com/wiki/Dark_Reign:_Young_Avengers_Vol_1_5?oldid=1421001"
Community content is available under CC-BY-SA unless otherwise noted.