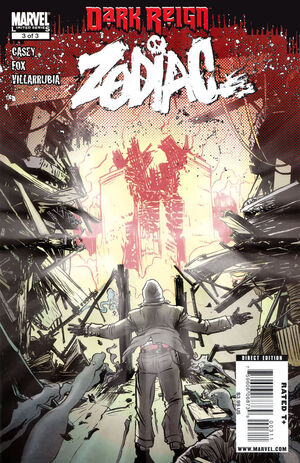 The explosive climax! New York in flames! Norman Osborn tearing out his bizarre-looking hair! The deepest, darkest secrets are finally revealed as Zodiac makes his big play. But will a lone H.A.M.M.E.R. Agent expose him before he can fulfill his destiny? You've never seen super-villainy like this!

Retrieved from "https://heykidscomics.fandom.com/wiki/Dark_Reign:_Zodiac_Vol_1_3?oldid=1753319"
Community content is available under CC-BY-SA unless otherwise noted.