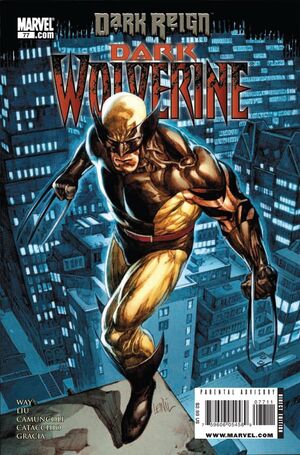 Appearing in "The Prince Part 3"Edit

Daken has proven himself capable of wearing many masks, but who's the real man underneath? As one of Norman Osborn’s Avengers, he has it all: power, fame, access...but what if it's not enough? Could Wolverine's son have a heart after all—and if so, will it be the Fantastic Four who help him discover it? Or will they find themselves on the receiving end of a betrayal so huge it will put them at war with the Dark Avengers? Part 3 (of 3)

Retrieved from "https://heykidscomics.fandom.com/wiki/Dark_Wolverine_Vol_1_77?oldid=1722691"
Community content is available under CC-BY-SA unless otherwise noted.