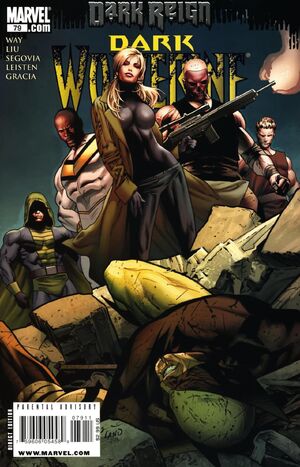 You are under arrest. You have the right to remain silent. Anything you say can and will be used against you in a court of law. If you get there.

Appearing in "My Hero, Part Two"Edit

“MY HERO” The unimaginable has happened—both Daken and Norman's plans have backfired! Now the victim of his own manipulations—beat almost to death by a gang of second-rate villains—Daken is forced to make an almost impossible admission: this "hero" thing is harder than it looks! But will digging himself out of the hole he's put himself in restore his pride—or ruin him forever? Part 2 (of 3).

Retrieved from "https://heykidscomics.fandom.com/wiki/Dark_Wolverine_Vol_1_79?oldid=1421006"
Community content is available under CC-BY-SA unless otherwise noted.