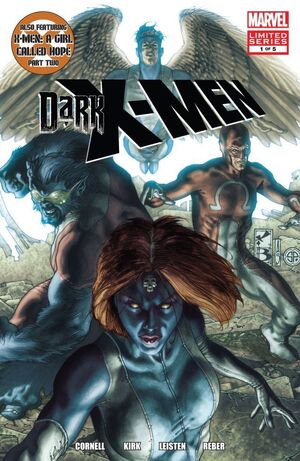 From the dust of UTOPIA comes DARK X-MEN! Never one to say “die”, Norman Osborn is keeping what’s left of HIS X-Men alive. MYSTIQUE! DARK BEAST! WEAPON OMEGA! MIMIC! They are the public face of mutants in an Osborn world. And what a face they are! But what does Nate Grey, A.K.A. X-MAN, have to do with it? The critically acclaimed team of PAUL CORNELL (BLACK WIDOW, TV’s Dr. Who) and Leonard Kirk (CAPTAIN BRITAIN AND MI13) take on the world of X!

Retrieved from "https://heykidscomics.fandom.com/wiki/Dark_X-Men_Vol_1_1?oldid=1648062"
Community content is available under CC-BY-SA unless otherwise noted.