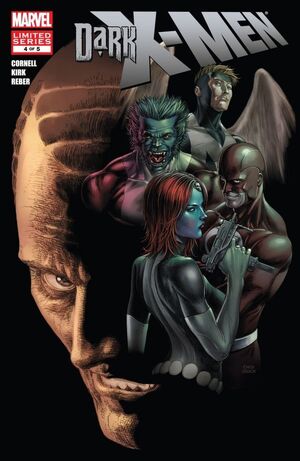 Osborn's mind? You really have dialed the wrong number. I'm glad it's a mistake though. And not a rescue attempt. I mean, I'd hate to have to be indebted -- to those I'm about to kill!

Appearing in "Journey To The Center Of The Goblin, Part Four"Edit

What has X-Man done to Norman Osborn? Whatever it is, it must be extreme because the Dark X-Men are making a journey into Osborn’s mind to fix it! But once they’re in, can they survive the depths of madness they find in the dark corners of Norman’s mental minefield?

Retrieved from "https://heykidscomics.fandom.com/wiki/Dark_X-Men_Vol_1_4?oldid=1421722"
Community content is available under CC-BY-SA unless otherwise noted.