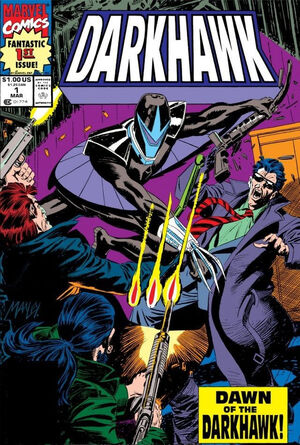 Look out, Bazin. This is the age of -- what name did that old wing say, oh yeah -- DARKHAWK! Yeah, Darkhawk. Ready or not, world -- here I come!

Appearing in "Dawn of the Darkhawk"Edit

Synopsis for "Dawn of the Darkhawk"Edit

First appearance of Darkhawk. Chris Powell was the teenage son of Mike Powell, a cop, and Grace Powell, a District Attorney. Following his younger twin brothers, Jon and Jason, to the abandoned amusement park across from his home, Chris discovered his father taking a bribe from mob boss Phillipe Bazin. While trying to escape with his brothers from Bazin's henchmen, Chris discovered an amulet that transformed him into the Darkhawk armor. When his father disappeared after Chris saw him, he swore to use the Darkhawk armor as an "Edge against crime."

Darkhawk's powers included a force blast which emanated from the amulet on his chest, a force shield from the same amulet, a claw cable which could serve as both a Wolverine-like claw, and a grapple cable, glider wings and later flight capability, enhanced vision and strength, and an image underneath the Darkhawk helmet which served to frighten and distract his enemies.

As the series developed, Chris learned that his armor was actually an autonomously existing android armor, one of five commissioned by an alien mob lord named Dargin Bokk, being held in a sentient space ship, Ocsh, in Null Space. (actually it was a sixth armor created some time later than the original 5)[1] When Chris grasped the amulet, it actually caused his body to switch places with that of the Darkhawk body, although his mind remained in control of the body.

Later, Chris and Darkhawk would actually split into two separate entities, with the armor being updated into the "2.0" form, as it was informally known. This advanced form of armor gave DH new powers, such as the ability to form a force shield encasing his body, an actual "Hawk" construct (a gigantic force-field shaped like a hawk), and the ability to summon weapons from Osch. By the end of the series, DH 2.0 and Chris re-merged, with the prospect of no longer needing to use the amulet in order to switch bodies.

The Hobgoblin appears next in Darkhawk # 2 (next issue)

Retrieved from "https://heykidscomics.fandom.com/wiki/Darkhawk_Vol_1_1?oldid=1421018"
Community content is available under CC-BY-SA unless otherwise noted.