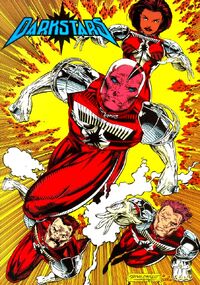 Darkstars were equipped with a powersuit called an "exo-mantle". There were four distinct models:

The standard armor was powered by the will of the Controllers. This armor also included a fail-safe installed by Director Jeddigar. The allowed him to turn off any of the exo-mantles completely.[1]

A toned down version of the original armor, with less powerful maser blasts, was created because Network for the Establishment and Maintenance of Order (NEMO) felt that primitive races could not be entrusted with the standard version with out proving themselves. It was slightly different in design, lacking the shoulder ornaments of the standard version.[2]

When Ferrin Colos was sucked into a miniature universe, he fought an evil version of himself. He joined the resistance, led by good versions of his old enemies Jeddigar and K'lassh.[3] After joining them, he was provided with the miniature universe's version of the exo-mantle. This armor had more powerful masers,[4] but using it required much more concentration than the old armor.[3]

After the Controllers took their hands off the Darkstar project, Director Stewart designed a new mantle. This version was not reliant on Controllers for energy and did not have Jeddigar's failsafes.[4] However, these exo-mantles were time consuming to construct. When Grayven began to hunt down the Darkstars, Stewart could only muster seventeen Darkstars with functioning armor for a counter-offensive.[5]

All versions of the exo-mantle granted the user:

Retrieved from "https://heykidscomics.fandom.com/wiki/Darkstar_Exo-Mantle?oldid=1519859"
Community content is available under CC-BY-SA unless otherwise noted.