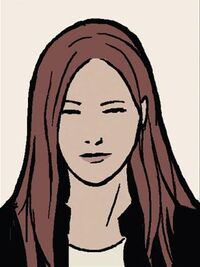 "Cherry" was the wife of a member of a tracksuit mafia. She tried to escape from her husband and flee New York City when she came across Clint Barton, who offered to buy her car. After having a romantic encounter with Barton, she was kidnapped by some members of the tracksuit mafia who broke into her apartment and also knocked out Clint.[1]

With the help of Kate Bishop, Barton started to chase the gangsters and managed to knock them down one by one. In the end, he accompanied "Cherry" to an airport, where she left the city.[1]

She was found by the mafia, as she was needed to open a special safe only she knew the code to, but managed to escape from them, shooting her ex-husband in self defense, and went to the Avengers Mansion asking Clint for help. Both went to a Russian pub, where Clint caused a distraction while she, whose real name was revealed to be Penny, sneaked in order to get the safe.

The following day, Penny revealed to Clint it was she who sent him via mail some comics in a special order, which featured a character similar to her. Clint didn't know about the special order and accidentally mixed them, the number of the issues in that special order where the combination to open the safe, but before Clint would start a plan to open it, she went away.[2]

When escaping from New York, she was tracked down by Black Widow (who saw her when she arrived to the Avengers Mansion), revealing her real name: Darlene Penelope Wright. The Widow made Penny explain her situation with Clint, of which he barely talked, and after being freed by her, Penny asked Natasha to take care of him.[3]