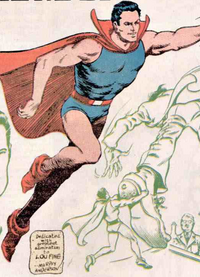 In 1939, scientist Darrel Dane developed a serum that gave him the power to shrink to a height of six inches and grow back to his normal size by willing himself to do so. After using his new power to save his girlfriend Martha Roberts from a murderous blackmailer, Dane decided to fight crime. Since he could shrink himself to the size of a doll, he called himself Doll Man.

In the summer of 1941, the Doll Man and the masked crime-fighter Midnight both tracked the mysterious figure calling himself Uncle Sam to a laboratory just in time to see Sam and six other super-heroes, the first of the Freedom Fighters, vanish within a vortex. Doll Man and Midnight ran into the vortex and were transported to the Nazi-occupied Paris of the alternate Earth called Earth-X. The two heroes aided the French Resistance there until February 1942, when they discovered the Japanese were about to attack California. The heroes returned to their own Earth via one of Uncle Sam's vortices, and Doll Man joined a new band of Freedom Fighters in returning to Earth-X to thwart the invasion.

Doll Man returned to his own Earth afterward, and served in the All-Star Squadron. Later that year, Doll Man opted to permanently relocate to Earth-X with a handful of other heroes to combat that world's Nazi menace. The Freedom Fighters continued to fight for several decades. Finally, with the help of the Justice Society of America and the Justice League of America, the Freedom Fighters ended the war. Doll Man and his fellow heroes went to Earth-One to fight crime but, through a misunderstanding, found themselves wanted by the law. This situation was resolved and Doll Man returned to Earth-X to help rebuild it.

In 1956, DC Comics obtained the rights to the Quality Comics characters, and re-introduced them 17 years later as the Freedom Fighters in Justice League of America #107 (Oct. 1973).